“Mr. William Gane, General Manager of the Moving Pictures Company of America, proprietor of this house, is shown standing at the right of the entrance. William Wright of Kalem Co., stands at the extreme left of the picture.”

Photos of the Kalem Stock Company are on display. The stage attraction is Ala Rajah, “wizard of  Sahara–he is not only mystifying he is really startling.”

The Film Index, January 22, 1910:
“Since its opening on September 13, 1909, Gane’s Manhattan Theatre at Broadway and 31st street, has been playing to its full capacity, and at times it is necessary to turn many away, especially in the evening, because of the lack of room.

“Yet the theatre is a very large and very modern one. Three stories of a big office building were torn out and remodeled. The back  of the orchestra is on a level with the street and gradually slopes down to the basement of the building.

“The balcony occupies what was  the second and third stories. Boxes are on either side of the orchestra. A large well-equipped stage affords room for any kind of vaudeville act. The house is artistically decorated and handsomely carpeted throughout. It is owned by the Moving Picture Company of America, of which Mr. Gane’s is the general manager.”

Cezar Del Valle is the author of the Brooklyn Theatre Index, a three-volume history of borough theatres.

“The rectifier, enclosed in a neat glass case, is located at the entrance, directly opposite the ticket booth, where it can be seen by the passerby. The sign attached to the case and reading ‘Part of our electrical equipment that helps to make perfect motion pictures,’ is of unique significance.

“When the apparatus is in operation, the beautiful blue-green light radiating from the rectifier tube positively announces that the play is on and also furnishes an element of activity which attracts attention on both sides of the street fully as much as the elaborate electric signs.

“It really is interesting to note the drawing power  or advertising value of the rectifier thus displayed–a glance at the entrance shows there’s something doing, and that’s enough to draw a crowd.

“The brilliant pool of bubbling mercury a the bottom of the rectifier draws like a magnet, and the flood of dazzling blue-green light is mesmerizing.”

A Tale of Two Cities

Del Valle has also joined with Local Expeditions to present a series of walking tours.

He is the author of the Brooklyn Theatre Index, a three-volume history of borough theatres. The first two chosen 2010 OUTSTANDING BOOK OF THE YEAR by the Theatre Historical Society. Final volume published in September 2014.

Currently editing and updating the third edition of the Brooklyn Theatre Index, Volume I.

The WordPress.com stats helper monkeys prepared a 2015 annual report for this blog.

A San Francisco cable car holds 60 people. This blog was viewed about 1,500 times in 2015. If it were a cable car, it would take about 25 trips to carry that many people. 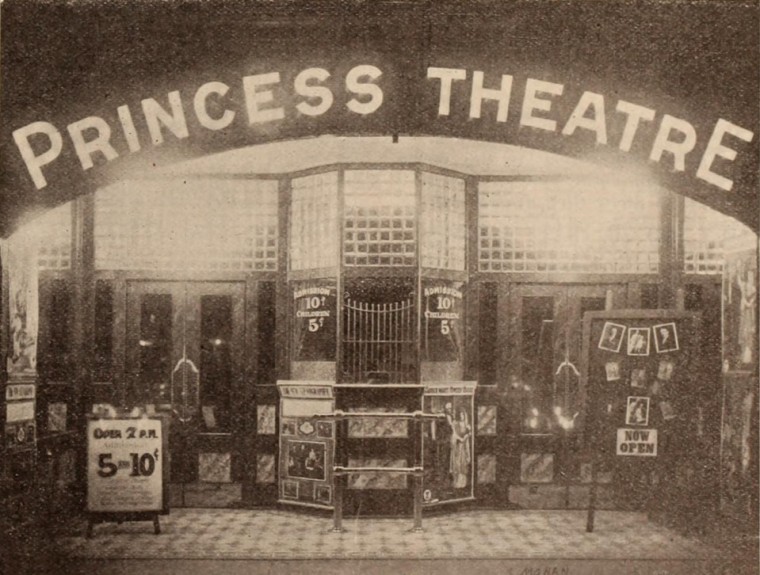 “The accompanying illustration shows one of the classiest theatre fronts in Western Ontario. The Princess is owned and operated by Richard and George Zakoor, and has a seating capacity for 520 persons.

“It has a stage of generous dimensions and the pictures are produced through the medium of an Edison machine and a mirror screen. The theatre has recently been remodelled to meet all the new provincial statutory requirements.

“It has three changes of programs a week, using licensed films exclusively. The Zakoor brothers claim that their patrons will stand all the comedy pictures they can secure and that there could be more of a slapstick variety run with a profit.

“‘Make them laugh,’ says manager Dick Zakoor, ‘and they’ll come back and laugh again.The only complaint we have to make is that we can’t get comedy enough. We find that our patrons want at least two comedy reels a performance.’ ”

Cezar Del Valle is the author of the Brooklyn Theatre Index, a three-volume history of borough theatres. The first two chosen 2010 Best Book of the Year by the Theatre Historical Society. Final volume published in September 2014.

He is available for theatre talks and walking tours in 2016: historical societies, libraries, senior centers, etc.

Details on independent walks will be posted in the New Year.

Now selling  on Etsy and Amazon

Recently on The Dream